Discover the World’s Most Famous Landmark

Think France, and your mind will undoubtedly arrive you at the Eiffel Tower. The immense iron structure is without doubt, the most iconic embellishment of Paris’ skyline; though it wasn’t always as admired as it is today. Learn about the origins of the Tour d’Eiffel, its turbulent history, and its many amenities with Amarante Champs-Elysées’ guide to this celebration of avant-garde architecture.

The Meteoric Rise from Eyesore to Emblem

100 years after the overthrow of the monarchy, the centennial of the French Revolution was remembered at the Exposition Universelle; at the centre of which was to be the unveiling of a new monumental landmark.

Subsequently, engineers and architects from around the globe all vied for their designs to be displayed at the World’s Fair of 1889. The winner, was a Frenchman named Gustave Eiffel; who, in what is probably the world’s largest exertion of ego, named his creation after himself.

Upon its completion, the Tour d’Eiffel towered over Paris, and indeed the world; where it would reside as the globe’s tallest construction for 41 years, until New York’s Chrysler Building was completed in 1930. Though, a sharp contrast to the picturesque Parisian architecture that made up the city at the turn of the twentieth century, many opposed the raising of the skyscraper - most famously through a petition which was signed by three hundred writers, artists and architects (one for each metre of the tower).

Artist, author and founder of the Arts and Crafts Movement, William Morris, was one such adversary of Eiffel’s enterprise; who would dine there every day just so he wouldn’t have to look upon the wrought iron edifice as he ate lunch... a feat also practiced by Guy de Maupassant to avoid its ‘colossal vulgarity’.

By 1918, public opinion towards the Eiffel Tower had largely changed. This was chiefly due to the immense massacres of World War I; with the construction emerging as a symbol of patriotism and resistance after the conflict. French writer and soldier, Guillaume Apollinaire, was one of the first to turn the tower into something of a monument with his 1914 poem La Tour Eiffel, written in the shape of the lattice structure.

The Man Who Sold the Eiffel Tower for Scrap Metal, Twice

Arguably the most memorable story surrounding the Eiffel Tower is that of Victor Lustig; the charismatic conman, who with the charm of Roger Moore, and the scarred appearance of a Bond villain, successfully sold the Eiffel Tower for scrap metal, twice!

The idea emerged in the May of 1925, when Lustig stumbled across an article claiming the Tour d’Eiffel was in great need of repair - which was believed to cost more than simply tearing the tower down. Seeing this, Victor seized the opportunity to pose as the government official who would be tasked with the selling of the scrap metal from the structure. His mark was the unfortunate André Poisson, who after being swindled, kept his misfortune a secret (probably through sheer embarrassment). This allowed Lustig to carry out the con again! Though Victor wasn’t as lucky the second time around, with the story exploding in the press, which resulted in the conman’s flight to America.

Wining, Dining & Socialising with the Best Views in Paris

The Jules Verne Restaurant, situated 125 metres above the capital on the second floor of the Eiffel Tower, offers some of the most spectacular views across the city, as well as highly alluring ones inside; courtesy of the elegant soft palette of chocolate brown and amber interiors - designed by Patrick Jouin.

More impressive still is the masterful menu from Michelin star hoarder, Alain Ducasse; bringing contemporary touches to classic French cuisine across this six-course celebration of gastronomy. Must tries include the scintillating selection of seafood, like the seared turbot, served with leeks in a black fig sauce; or for special occasions, the oven-baked blue lobster. Desserts are also something of a Ducasse speciality, with a toothsome lineup of sweets ever present. Courses are also accompanied by a cultured wine list, spanning the very sweet to the bone dry; though those who prefer their vinos with a bit of fizz can pop to the top of the tower, where an enchanting Champagne Bar makes its home.

Before you make the journey back down Gustave Eiffel’s ingenious example of engineering, don’t forget to stop by his office, where the architect once entertained his prestigious guests (Thomas Edison is one notable example). Braver visitors to the tower can also walk along the glass floor on the first level, stationed 57 metres above Paris! 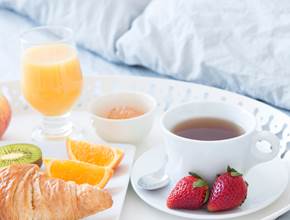